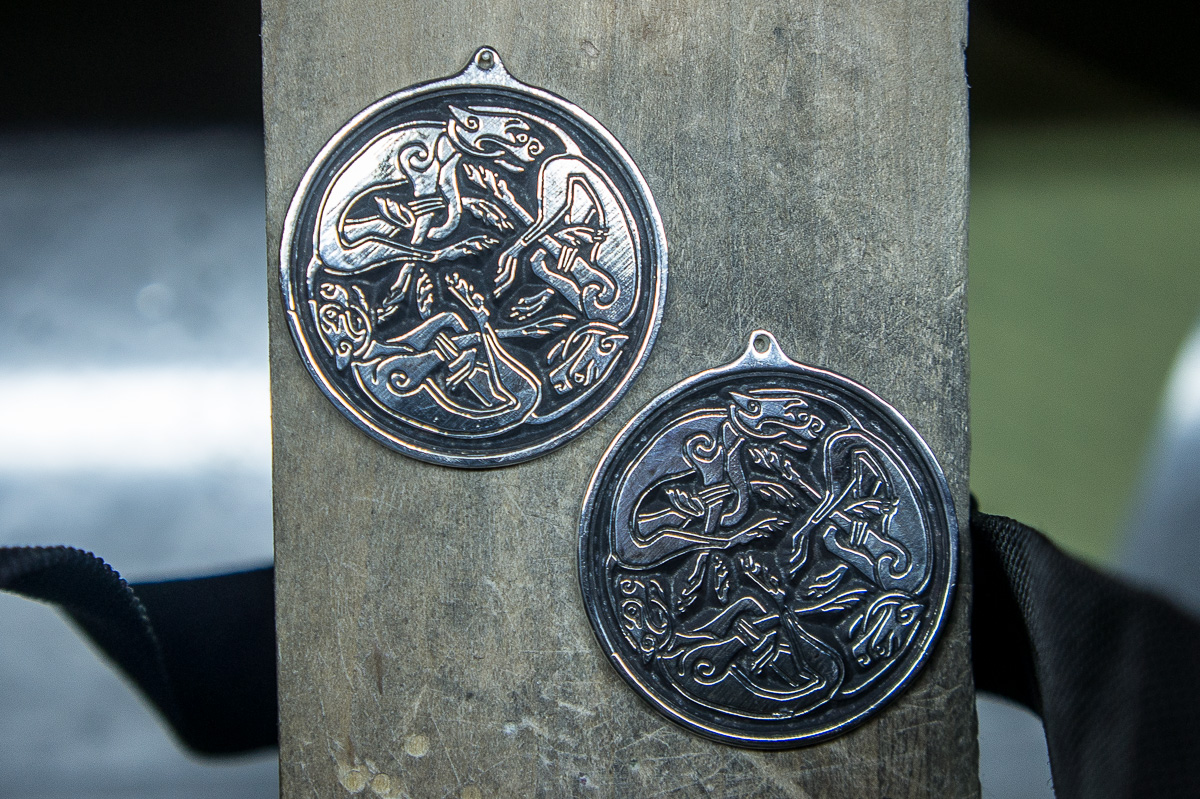 These are two of the Celtic Three Dog pendants I recently cast in sterling silver. The background was darkened using Midas “Black Max” solution. A wax master for one of them is shown in the previous post. I made two pendants (using two wax master carvings) in a single pour in one flask.

I am confident now that I can make just about anything with lost wax casting. I have the process working very well and I have a good repeatable routine. I’m looking now for new designs and objects (subject matter) for casting. 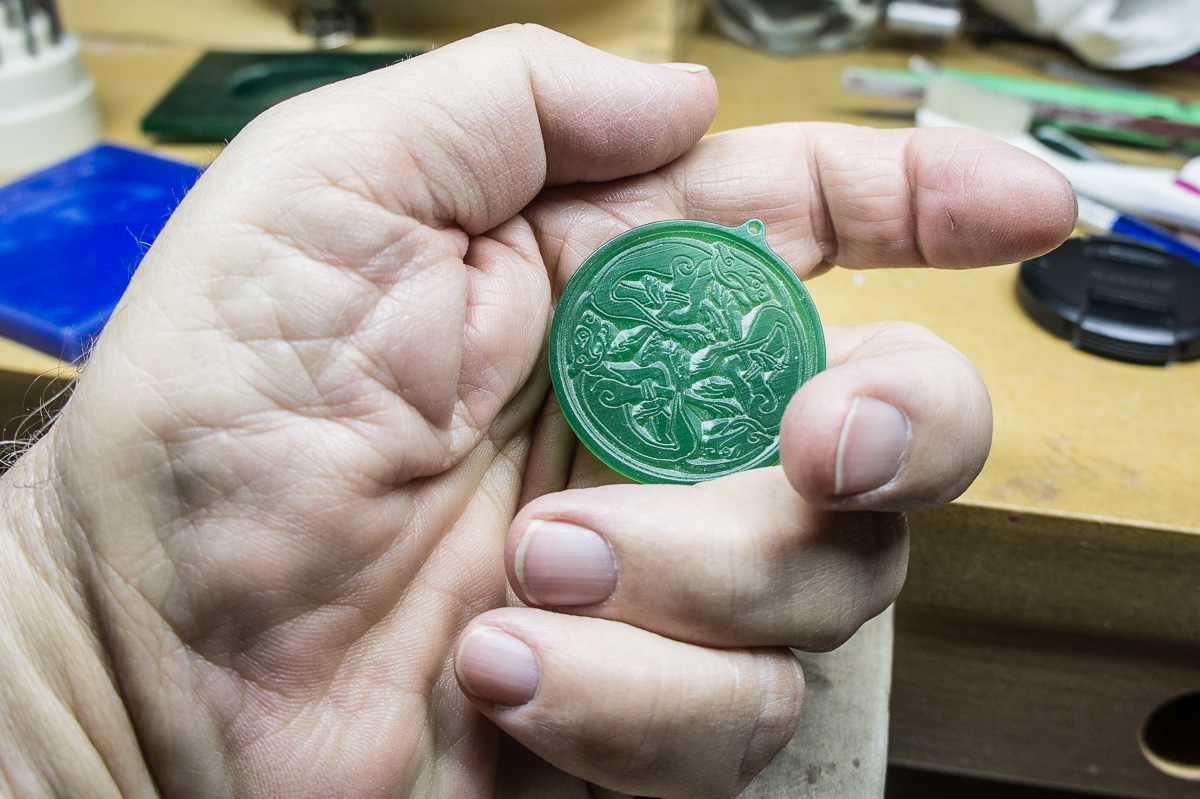 I think I am going to get committed because of this lost wax mania.  Mania is a mental illness marked by periods of great excitement, euphoria, delusions, and over activity. I have all the symptoms. Maybe it is a bad thing. To me it seems like a good thing and I really enjoy the “high”. Better than drugs I assume.

I often studied and thought of doing castings. Maybe because I was born and raised in a steel making town. Pour molten iron into a mold and out comes a new iron part. And it could be done over and over again.

There must have been a lot of folks doing it as a cottage business to the model railroad market and maybe an offspring of the jewelry lost wax casting. The model parts were usually brass or white metal. I am sure it was done on spin casting centripetal machinery and perhaps something like plastic injection molding system.

I built some models from rather large white metal or zinc castings where I had to file off the flash, but I am not sure of the exact casting process.

On a small scale, how I am casting today could be used. But what I do is not anything near commercial production quantity. It’s quite an investment if all I wanted to do was a few model train parts.

I am in my comfort zone right now, just casting the pretty things I like to make. I really like working with the wax with both the CNC and manual carving. No subject or design is off limits, but it does have to fit within my tools and abilities.

Silver is my metal of choice right now, but I have experimented with brass casting. Just depends on what I am making. So much to try and do, it could drive me crazy… 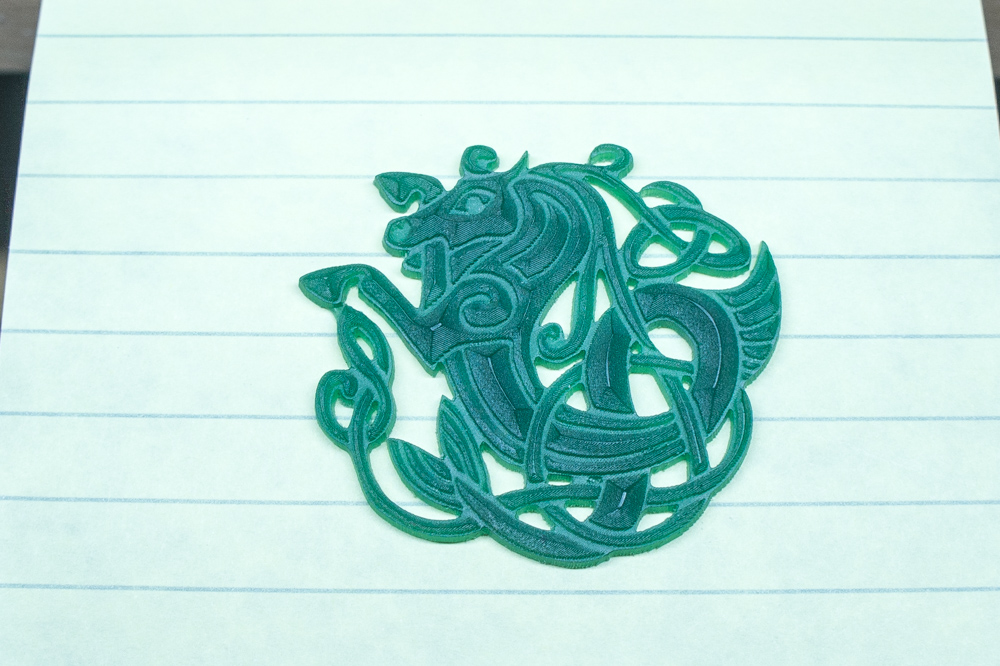 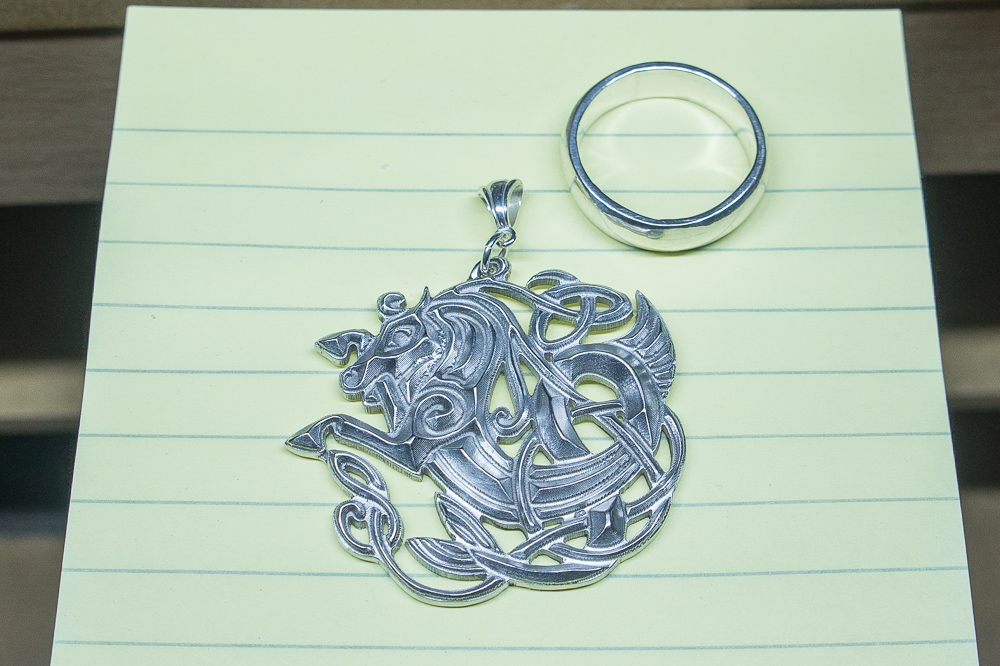 I searched some Celtic illustrations looking for something I could CNC carve into a pendent for a necklace. This horse looking creature caught my eye. It looks part horse, part sea monster, and part Celtic with its typical Celtic knots look. Further research reveals it is a water horse, hippocamp or more friendly Scottish (Gaelic) or Celtic name, a Kelpie. So Kelpie it is... I thought I just had to put some work into the design.

My hands and eyes are not good enough to do this just with hand tools. I use Vectric Aspire to build the design digitally. The design took about two days of computer work and created around a quarter million lines of code.

The result is the wax carving shown in green wax that took 1:45 to run on my wax carving mill. That wax was used in lost wax casting to create the pendent shown in Sterling SIlver. That is a post-it note for the background and the Kelpie is under two inches wide.

I also made the wedding style band which was carved entirely by hand from a 3/16" (0.1875") thin, flat, square, wax blank . I always like to have several items when I am going to expend the energy to heat the kiln to 1350 degrees for several hours. Total kiln time is usually 10-12 hours per heat. 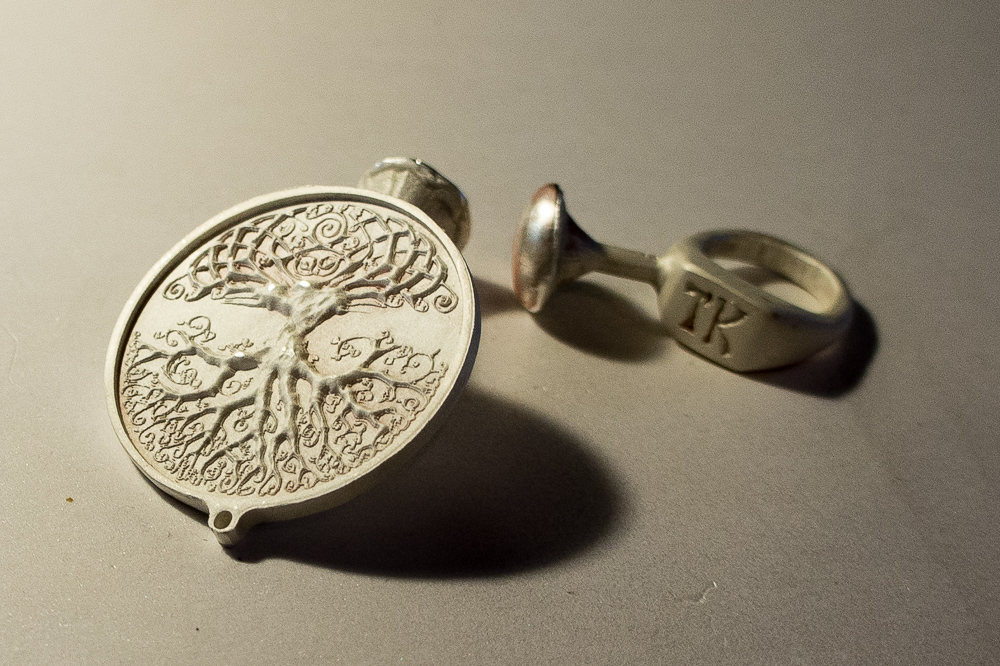 So far, anyway. I just did two lost wax silver casting this morning. There is always a bit of concern by me if they will turn out fully cast. I have been doing vacuum assisted casts very well but there is always a chance all the wax work will be lost from an incomplete pour. It is “Lost Wax” after all.

I had been putting this session off for a couple of months as it's been very hot here in Texas. The issue is that the kiln has to fire for over 12 hours and gets up to 1350 degrees. It does some pre heating and wax melting at 300 degrees for a couple of hours then starts to rise at 175 degrees per hour up to 1350 degrees. It holds 1350 for three hours. Next it cools to 800 degrees which is the casting temperature of the mold. I have  programmed the kiln control to hold for 100 hours at 800 so I can do the casting on my own time schedule after the big heat.

It does have to stay at 800 degrees for several hours so the flask temperature can equalize at that number before I can do the cast.

This type of small lost wax casting means I am working with a lot of heat. The silver melting and pouring only takes about 10 minutes and is almost anti-climatic after doing all the work to get to the pouring ceremony. I had jitters doing my very first pours several years ago but now it is just part of the process.

I started firing my kiln about 5:00 PM. On Sunday I had previously accomplished the investment work about mid afternoon. The investment takes a few hours to firmly set before it can be heated in the kiln.

The garage (shop) temperature was about 90 degrees so the investment work went much quicker and the vacuum de-airing was much more vigorous than usual. In Texas hot water comes out both sides of the faucet in late August. Every detail in lost wax casting is measured and controlled even water temperature.

My main concern was what would a 1350 degree kiln do to the shop temperature. That's why I do kiln firing over night. I left the garage door open about 6-8 inches top and bottom all night to let the hot air out. I had two fans going. I was a bit worried about stray animal invasions under the door. Ha.

I monitored the shop temperature until midnight then woke and checked again about 3:00 AM. It was hovering at 85 degrees on my wall thermometer all night but warmer near the kiln. At 7:00 this morning it was still 85 so all went rather well. It was about 80 outdoors last night.

I made some coffee and started work prepping for the pours. It was all over before 8:30 and they both went very well. (See picture) Still a lot of the silver work left to do but the major fun of working in the heat is over. This is how silver looks straight out of the acid pickel which cleans the silver and makes it appear white. No silver finish work at all has been done at this point. These are raw castings.

Now the shop can cool down (?) to normal ambient 85 Texas summer temperature. At least the 105 degree days have stopped for awhile.

I made this for a close personal friend whose hobby interest is playing and somewhat collecting guitars, Gibsons preferably. I free-lanced this design but it is Gibson-like. I call it "no strings attached " for obvious reasons.

This ring is 100% hand carved from a block of wax. Total effort, working a few hours at each session, was about a week, start to finish.

There is a bit more information on this project at: Ramblin' Dan's Workshop.

I am now confident with the lost wax casting process. My intention is to work on more detailed designs, since I have less fear of losing my work in a bad cast. It's become a lot more relaxing and fun to do. Actually, it always has been fun ;)