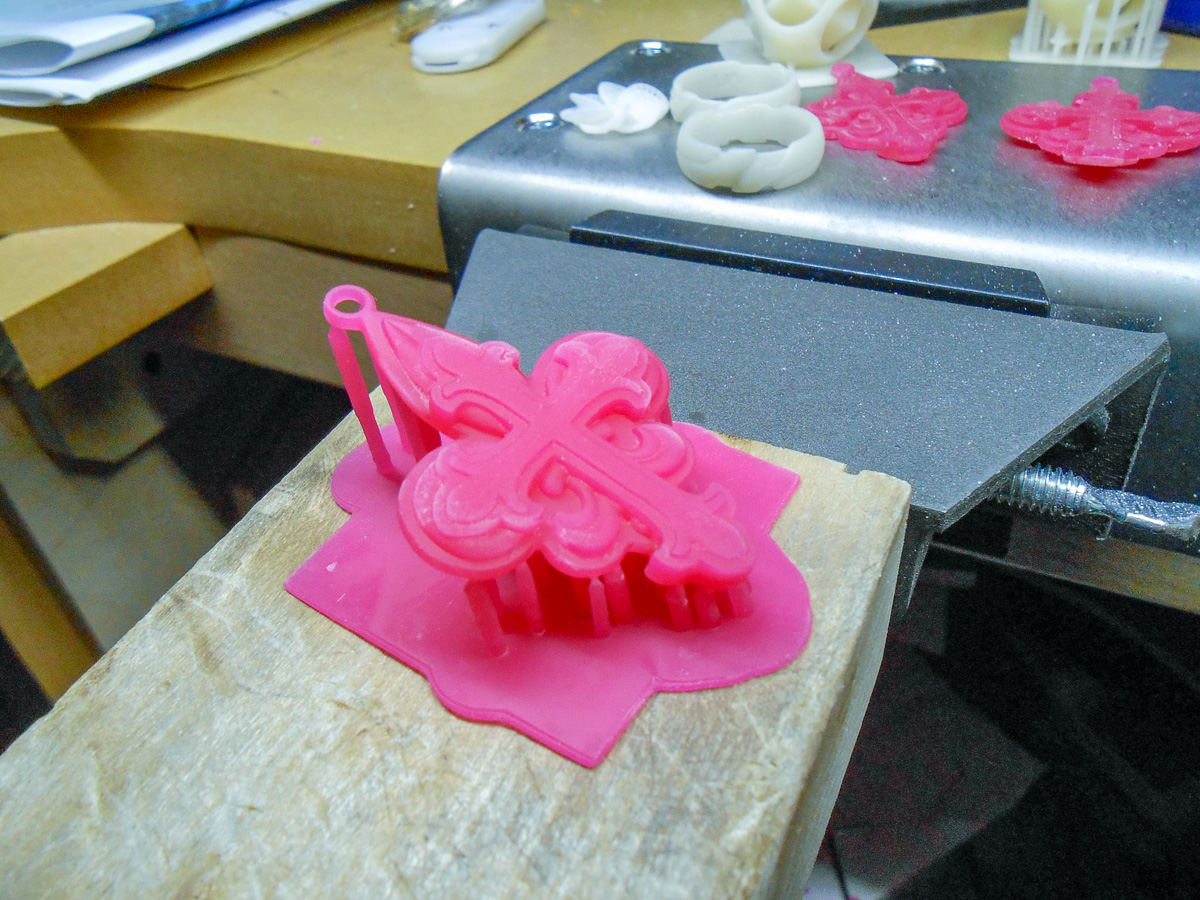 I am an enthusiast for 3D printing. Because of this, I set a goal to use 3D printing to produce master models for Lost Wax Casting (LWC) in my silver work.

One obstacle is the quality of the surface produced by standard Fused Deposition Material (FDM) of the popular plastic filament style 3D printers. FDM is getting good finish when printed at 0.2mm per layer or less. But not good enough for casting LWC model.

Another style of 3D printing using an Ultra Violet (UV) curing resin can produce layer heights as small as 0.025mm (25 microns) This is outstanding resolution. Several versions of this process exist. Some use a LASER beam to scan the layer. It's called Stereo Lithographic Apparatus (SLA). Another process uses a full layer exposure like a B&W negative for each layer. It's called a Digital Light Process (DLP)

Shown here is a Wanhao Duplicator 7 (WD7) I own. I bought it specifically for use in producing casting models. There are resins available that (should) burn out the same or nearly the same as wax in the Lost Wax Process. The key word is "should". More coming about that claim.

For more than several years I have been producing CAD models to produce programming to run my Computer Numeric Control (CNC) wax milling machine. A switch to producing Stereo Lithographic files (.STL) for 3D printing is a no brainier. The only difference is the output file created.

The first step in this new approach to lost wax casting is learning how to operate this new printer. It is totally different than my previous 3D printers. I have done some write up in my 3D Printing website. Here is the link:http://rd3dpds.com/resin-printer I have also posted some blogs on the subject: http://rd3dpds.com/blog

This article describes the outcome of this great experiment.

I have just completed my first casting of silver using the casting material from the WD7 printer. I was able, after some trial and error, to produce very decent quality 3D prints from the WD7. This printer works like a camera and film. The exposure for each layer of the print is critical to getting a sharp layer. The model I used here was as good a surface as I produce using wax carving. A good start. The printer is not a problem.

The issue I have discovered, is getting a clean burnout of the resin used to create the model. It is marketed as "castable resin". I followed the burn out schedule of time and temperature which is the same as I use for wax. The manufacturer claims very low ash, but does not state "no ash". Ash is the solid material left behind when all the volatile material is vaporized by high heat, 1350 degrees for 3 hours.

In the pictures can be seen the result of a non-clean burnout. This is a very disappointing result. This pendant (although I stamped my mark on it) is not of the quality I would offer for sale or as an example of my quality standard. The quality is very poor. It is the worst result I have ever cast. Of course all my other casts were made using wax masters.

At this point 3D printing is not going to be my go-to method for LWC. I will stay with WAX masters for the bulk of my work, thank-you...

I will continue to experiment and research casting resins. The 3D process will allow me to create models for LWC that can't be made by hand or CNC milling. That remains my goal. I am not going to let this failure be my only attempt. But I also don't want to stop doing my LWC until I get it working.

Right now I have a nice, but some what messy, very high resolution 3D printer. But I have a resin burn out that is very far from ideal.

The photography makes it look far worse than when I hold the pendant in my hand. It IS as bad as it looks, the camera doesn't lie.

I'll find a way to make this process work. I have spent enough time for now. The white residue from the alcohol wash may have contributed, but I doubt that. I'll try another resin cast the next time I have some wax masters to cast. I may need to try a more expensive castable resin. I have to admit this is the cheap stuff. It is also water soluble which was the initial attraction. Other resins require isopropyl Alcohol to clean up and dissolving of the resin residue.

There are other ways to skin this cat. The 3D printer can make hard models that are then used for making rubber molds that can be injected with wax. The wax is used for casting. The cost is material and another extra step.

Bottom line for me right now. The printer is certainly capable. The model material seems to be less than capable. It could be my technique. I have to decide if the time is worth the investment. I already get excellent cast product using wax. Being a pioneer with a new technique is hard work...